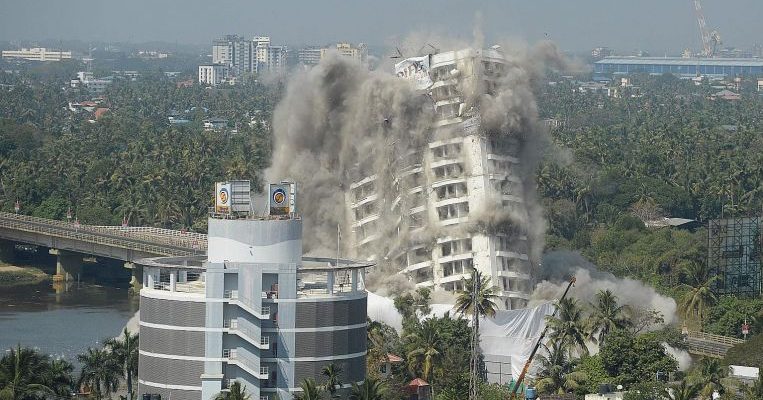 The razing of the illegal apartment blocks built very close to a posh lakeside in the state’s Maradu district took place after a court last year ordered their demolition for violating laws that prohibit construction within a certain distance from the sea, rivers, lakes and other water bodies.

The apartment blocks were a pale shadow of their former luxurious appearance after demolition agencies chipped away at the buildings for two months, reducing them to a bare skeletal frame. The buildings came down crashing in seconds as a thick cloud of smoke spread.

Almost 2,000 people in nearby residential areas were evacuated prior to the demolition, which was witnessed by scores of people.

A remaining two buildings will be demolished today.

The court’s order last year had come as a shock to more than 300 apartment owners. When all legal options to halt the demolition were exhausted, they resorted to protests and hunger strikes.

Finally, when the administration cut the power supply, they were forced to vacate their homes. Hours before the demolition, some of the residents flocked to the site for one last view of their former homes.

Environmental experts have raised concern that the demolition of the four structures will have a huge impact on Vembanadu Lake – an ecologically sensitive area.

Nearby residents said they were worried about the impact of the demolition on their homes.

“One of the companies tasked with demolition has no expertise. They deal in steel and scrap. We are really worried,” a resident who has moved into temporary accommodation told Agence France-Presse.

“When they were demolishing the swimming pool, some of the houses in our neighbourhood developed cracks.”

Kerala is famed for its backwaters, brackish lagoons and lakes that run parallel to the Arabian Sea, creating an environmentally fragile region. In 2018, the state was battered by its worst floods in almost a century that killed more than 400 people. Experts blamed the disaster on the government’s eagerness to build houses, hotels and resorts with little regard for coastal planning regulations.