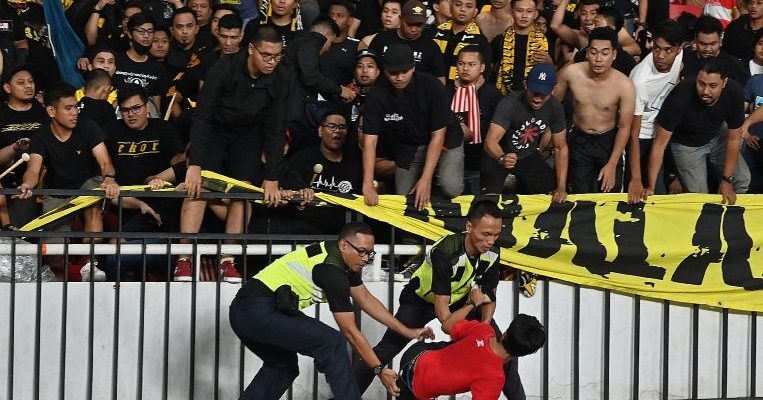 PETALING JAYA • Malaysia’s Youth and Sports Minister has chided the Indonesian police force for downplaying the violence that broke out at the Malaysia-Indonesia World Cup qualifying match as fans “splashing water”.

“If they were only ‘splashing water’, why was the game forced to be halted until the situation was calm again,” Mr Syed Saddiq Syed Abdul Rahmah questioned on Twitter yesterday.

“Why was there a need to fire tear gas?

“Why were we quarantined for more than two hours?

“Why were there supporters in front of my eyes throwing metal objects?

“I demand justice,” he said.

Mr Syed Saddiq was responding to a CNN Indonesia report citing Metro Jaya Police public relations head, Commissioner Argo Yuwono, denying that there was a riot at the stadium on Thursday.

Mr Argo said the Indonesian supporters were merely “splashing water”. He also denied there were Indonesians who were detained or any police officers who were hurt.

CNN Indonesia said it saw police firing tear gas towards the crowd at the VVIP entrance at Gate 1.

What was supposed to be a sweet victory for Malaysians who witnessed Harimau Malaya beating Indonesia 3-2 in their World Cup qualifying match quickly turned sour at the Gelora Bung Karno Stadium in Jakarta on Thursday night.

The match was marred by crowd trouble and had to be stopped for 10 minutes until police intervened during the second half.

Things took a turn for the worse for Malaysian fans as the game ended. Metal objects, bottles and flares were among the items thrown at the Malaysian fans.

It was also confirmed that at least one Malaysian was injured during the incident.

Mr Syed Saddiq and his entourage were placed in quarantine within the stadium before they could leave safely.

Indonesian Sports and Youth Minister Imam Nahrawi has apologised for the violent incidents.