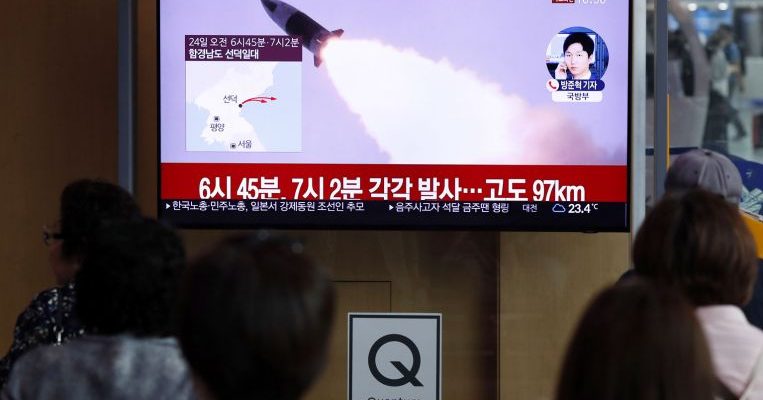 SEOUL • North Korea fired what appeared to be two short-range ballistic missiles into the sea off its east coast yesterday, the South Korean military said, the latest in amid stalled denuclearisation talks.

The launches have complicated attempts to restart talks between US and North Korean negotiators over the future of Pyongyang’s nuclear weapons and ballistic missile programmes.

The two leaders agreed in June to restart , but the US has so far been unsuccessful in its attempts to get the talks going again.

Mr Trump said earlier this month that Mr Kim told him he was ready to resume talks on North Korea’s nuclear and missile programmes and would stop missile testing as soon as US-South Korea military exercises ended.

Mr Trump said after the latest launches that the US has a good relationship with North Korea. “Kim Jong Un has been… pretty straight with me,” Mr Trump told reporters at the White House.

North Korea has repeatedly criticised the mostly computer-simulated drills in recent weeks, as well as South Korea’s import of high-tech weapons such as F-35 stealth jets and the US testing of its intermediate-range cruise missile as threatening and hindering dialogue. It kept up its harsh criticism of sanctions imposed because of its nuclear and missile programmes.

“The US should clearly understand that we do not have a lingering attachment on sanctions relief and that we will never barter the strategic security of the country for the sanctions relief,” a commentary on North Korean state media KCNA said yesterday.

South Korea’s NSC called for North Korea to stop escalating military tensions and agreed to make diplomatic efforts to bring it to the negotiating table with the US as soon as possible, South Korea’s presidential office said in a statement.

A senior US administration official said: “We are aware of reports of a missile launch from North Korea and continue to monitor the situation. We are consulting closely with our Japanese and South Korean allies.”

He confirmed that the latest missiles fell outside Japan’s Exclusive Economic Zone and posed no immediate threat to Japan.

As North Korea closely monitors regional affairs, I believe the country took advantage of the situation.

JAPANESE DEFENCE MINISTER TAKESHI IWAYA, referring to the timing of the missile firings, which came a day after Seoul informed Tokyo of its decision not to renew a bilateral military intelligence-sharing pact.

The launches came a day after Seoul informed Tokyo of its decision not to renew a bilateral military intelligence-sharing pact, which expires on Nov 23, amid an intensifying spat between the two neighbours over wartime history and trade policy.

“As North Korea closely monitors regional affairs, I believe the country took advantage of the situation,” Mr Iwaya told reporters, referring to the timing of the missile firings.

South Korea’s JSC said North Korea had fired what appeared to be short-range ballistic missiles at 6.45am and 7.02am Korean Standard Time yesterday from around Sondok in South Hamgyong province.

They flew about 380km and reached an altitude of 97km, the JSC said, the highest of all nine North Korean launches so far this year.