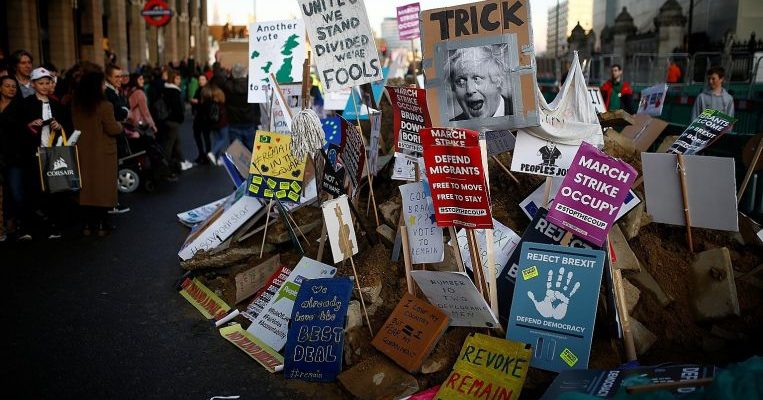 LONDON • Rebel Members of Parliament in Mr Boris Johnson’s Conservative Party are exploring ways to seize control of the British Prime Minister’s agenda by ensuring a debate and vote in Parliament on Brexit legislation and a second referendum as soon as this week, The Guardian newspaper reported yesterday.

Several MPs told The Guardian that the plan would be put into motion if Mr Johnson persisted with his stance that the government would put his withdrawal agreement Bill on hold unless MPs agree to an election on Dec 12.

The plan being pushed by supporters of a second referendum and soft Brexit would try to use procedure under standing order 24 to take control of the timetable in Parliament.

The MPs would subsequently attempt to introduce either Mr Johnson’s Brexit deal or an agreement brokered by former prime minister Theresa May, with possible votes on a Customs union, a second referendum and extending the transition period after Britain’s exit to prevent a departure on World Trade Organisation (WTO) terms.

The Guardian reported that some MPs have discussed the plans with former EU officials to ascertain whether the move would be enough to convince Brussels that the British Parliament would use any extension of the Brexit deadline to break the deadlock.

On Friday, Mr Johnson said that he would refuse to bring back his Brexit legislation unless MPs agreed to vote in favour of a general election tomorrow.

Mr Johnson told opposition Labour Party leader Jeremy Corbyn to “man up” and vote for the election, asserting that Parliament would only engage in “pointless Brexitology” if given the chance to debate his Brexit plan without a deadline overshadowing the proceedings.

Mr Corbyn, however, said he would only vote for an election if Mr Johnson made it clear to Parliament that Britain would not exit the European Union on WTO terms, warning that the Prime Minister’s plan included the possibility of a no-deal withdrawal.

EU envoys on Friday failed to reach an agreement on the length of a Brexit extension requested by Britain after the French ambassador resisted the proposal for a three-month delay, in a move welcomed by Downing Street.

However, if the EU grants a three-month extension and Labour continues to reject Mr Johnson’s call for an election, the Prime Minister may not be able to stop the withdrawal agreement from being revived by backbenchers.

The decision would rest with Speaker John Bercow, who could allow it to be “unpaused”.

Labour MP Peter Kyle said he was in talks with former Conservative Party members expelled by Mr Johnson on their next steps, adding that bringing the agreement back to Parliament was “one of the options on the shelf”.

Mr Kyle said preparatory work for such a scenario had been done over the summer, but the rebel MPs wanted to see what the government and Mr Corbyn would do in the next few days.

Mr Kyle said he did not believe Mr Johnson’s threat that Brexit legislation would not be brought back to the Commons before Christmas, which would mean the backbenchers might not need to bring back the Bill themselves and could amend his deal. Mr Kyle also said that support for a second Brexit referendum was rising.

If the EU grants a three-month extension and Labour continues to reject Mr Johnson’s call for an election, the Prime Minister may not be able to stop the withdrawal agreement from being revived by backbenchers.

Mr Dominic Grieve, an expelled Conservative Party MP, said that bringing back the withdrawal Bill with the aim of attaching a second referendum was “within the field of options”, but any attempt by backbenchers to bring in primary legislation would be full of procedural hurdles.

Meanwhile, the British government denied a newspaper report yesterday that it will seek to weaken workers’ rights after the country leaves the EU.

The Financial Times published extracts of leaked documents from the government’s Brexit ministry which state that a so-called “level playing field” commitment to the EU “leaves room for interpretation”, reported Reuters.

According to the FT, Brexit ministry officials wrote that the “interpretation (by the UK and EU) of these commitments will be very different”, and that the text represented a “much more open starting point for future relationship negotiations”.

Government ministers rejected the FT’s suggestion that this meant British labour standards would diverge significantly from those in the EU.