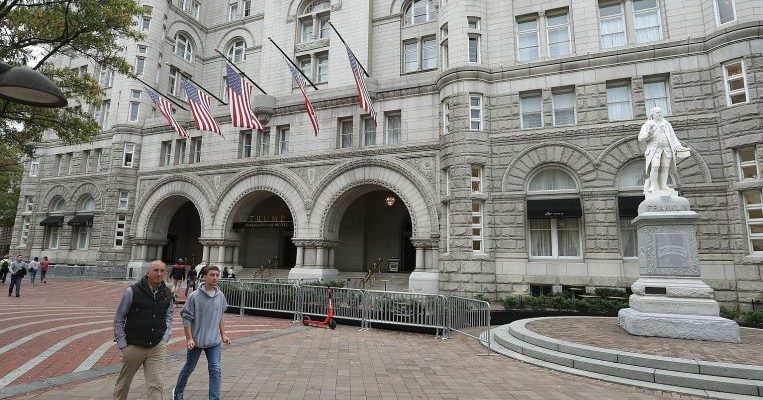 WASHINGTON • It is the most visible and potent symbol of the ethics debate that has dogged US President Donald Trump as he has served simultaneously as the nation’s chief executive and real estate developer with a chain of luxury hotels. And now it is for sale.

The Trump International Hotel in Washington, five blocks down Pennsylvania Avenue from the White House, is on the market, just three years after the Trump family spent US$200 million (S$271 million) to open it in the historic, federally owned Old Post Office building – and at a time when Mr Trump is facing impeachment and a tough 2020 re-election campaign.

The Trump Organisation’s announcement that it is listing the hotel with a real estate agent and wants to listen to offers came less than a week after Mr Trump’s two roles intersected in a politically and ethically awkward way: He disclosed his intention to host next year’s Group of Seven meeting of world leaders at the Trump National Doral resort near Miami, then had to abandon the plan after hearing from fellow Republicans that it was a bad idea.

But nothing has rivalled the steady stream of criticism – and the multiple lawsuits – accusing Mr Trump of violating the Constitution by accepting payments at his 263-room hotel in Washington from foreign governments.

The hotel has also been a magnet for millions of dollars in business from lobbyists, corporate executives and political groups, many of them pushing the White House for policy actions or other favours.

In offering the hotel for sale, the Trump family acknowledged this tension, even as it argued that the foreign government and politically connected business at the hotel does not constitute a legitimate ethical issue. “Since we opened our doors, we have received tremendous interest in this hotel and, as real-estate developers, we are always willing to explore our options,” Mr Eric Trump, one of the President’s sons, said on Friday.

“People are objecting to our making so much money on the hotel.”

The hotel opened in late 2016, just before Mr Trump was elected President, and quickly became one of the single biggest sources of revenue for his family, according to financial disclosure statements, collecting US$40.8 million last year.

Mr Trump’s daughter, Ivanka, even while working in the White House, also retained a stake in the property, earning nearly US$4 million from it last year.

The hotel in Washington is one of the few parts of the company that has had major revenue growth since Mr Trump took office.

Trump family executives declined to address questions on Friday about why they had decided to put the hotel up for sale now, with impeachment proceedings picking up and the 2020 presidential campaign in full swing.

Mr Trump’s annual financial disclosure statement shows his hotels have been underperforming other similar luxury properties in a number of major hotel markets in the United States, industry analysts said.