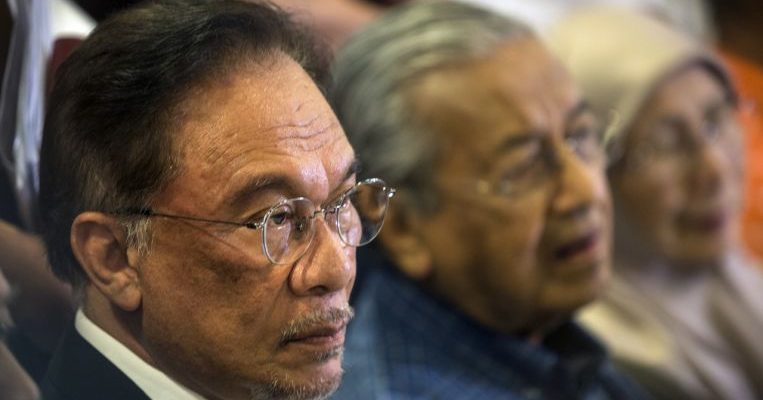 Roughly 1,200 delegates attended the meeting that was filled with speakers from Datuk Seri Anwar’s camp.

Mr Anwar in his speech sought to assuage concern among party delegates that his feud with Datuk Seri Azmin would spread into Sarawak, ahead of expected state elections next year.

“We must work as one team, this goes to all PKR leaders,” Mr Anwar told the delegates present in Miri, an eastern town in the state.

The PKR Sarawak convention was earlier “called off” by state chairman Baru Bian to protest against a decision by the PKR Youth wing to rescind an invitation for Mr Azmin to speak at the wing’s convention next month. Mr Baru is a close supporter of Mr Azmin.

But PKR’s central leadership, led by its president, Mr Anwar, proceeded with the Sarawak meeting and used the event to give its side of the story.

“We, including Baru Bian, must listen to the people and our members from all the branches. We must strengthen our party to win Sarawak and champion issues close to the people’s heart,” said Mr Anwar.

All other states in the country held their polls in tandem with the general election last year.

The next Sarawak state election is not due until September 2021, but the GPS alliance is widely expected to call one next year.

The remaining five wards are held by a small Sarawak party and an independent.

The Sarawak state election has a strong bearing on national politics. This is because Sarawak has a total of 31 MPs in the national Parliament – the biggest number of federal lawmakers from one state in the 222-seat Lower House. PH now has 12 federal MPs from Sarawak and GPS the remaining 19.

PH is aiming to capture more than its current 10 seats in the state legislature in order to strengthen its voter base for the national polls in 2023.

As PKR state leaders begin identifying candidates for the state election, Mr Anwar has asked for the involvement of all PKR branch leaders to avoid allegations that party decisions are made unilaterally by the central leadership that is headed by him.

“Every branch should not feel they’ve been discriminated (against) or marginalised,” he said, in an attempt to diffuse claims of favouritism.

Mr Azmin’s camp had alleged in last year’s PKR election that Mr Anwar had appointed his supporters into the central leadership.

Mr Anwar’s response yesterday: “People say Anwar appoints his people in all the states. To me, everyone is my people.”

Meanwhile, Mr Anwar’s allies within PKR spoke at length during the convention’s opening, dropping not-so-subtle hints that those supporting Mr Azmin have been absent from leadership meetings, making any party discussions impossible.