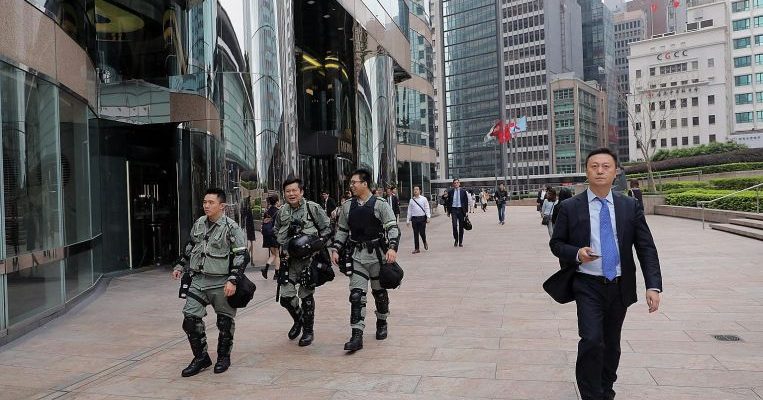 Asian governments are starting to do their bit to revive economic growth as central banks gradually pull back on monetary policy easing.

Japan’s government announced a stimulus package on Thursday worth some 26 trillion yen (S$326 billion), with about half coming from government spending. That came a day after Hong Kong announced additional steps to shore up businesses suffering from months of political unrest.

“We’re going to see more of this,” said Mr Chua Hak Bin, a senior economist at Maybank Kim Eng Research in Singapore. “The space for monetary policy has narrowed, given how close interest rates are to the zero bound. There’s an increasing recognition that you can’t just depend on central banks; governments have to provide support through fiscal policy.”

That may be easier said than done. Unlike interest-rate decisions generally made by a small central bank committee, fiscal stimulus needs approval from governments and sometimes legislatures, and may run up against debt limits anchored in law. In addition, the impact of fiscal policy may appear only with a considerable lag – a disincentive for leaders who might be out of office by then.

Still, policymakers “are starting to accept that something more needs to be done”, said Ms Tuuli McCully, head of Asia-Pacific economics at Scotiabank in Singapore. “I think the reality is kicking in that they need to loosen their purse strings.”

Here is an overview of what various Asian economies have done to date:

Prime Minister Shinzo Abe described the new stimulus as a three-pillared package to boost disaster relief, protect against downside risks and prepare for longer-term growth after the 2020 Tokyo Olympics.

It should boost real growth by about 1.4 percentage points, according to a draft of the package obtained by Bloomberg.

The centrepiece of China’s “proactive” fiscal policy this year has been about two trillion yuan (S$387 billion) in tax cuts. While those reductions helped swell the deficit, they have not arrested the economy’s slowdown, and growth is projected to slip below 6 per cent next year.

A key meeting to set economic policy this month will detail the balance between monetary and fiscal settings for next year.

Meanwhile, officials are bringing forward from next year the use of some off-balance-sheet infrastructure spending financed by local government debt.

Prime Minister Narendra Modi’s administration has taken a series of steps to halt a slump in the economy, adding to the monetary stimulus from five interest-rate cuts this year. Measures include a US$20 billion (S$27 billion) corporate tax cut, a US$1.4 billion fund to salvage stalled residential projects and a US$7 billion stimulus for exporters. Finance Minister Nirmala Sitharaman is open to doing more, but room is limited with the government expected to breach its deficit goal of 3.3 per cent of gross domestic product (GDP).

As economic growth slumps to a decade low, South Korea’s government proposed a record 513.5 trillion won (S$586 billion) budget for next year, a 9.3 per cent increase from this year’s main budget. Finance Minister Hong Nam-ki called the budget “as expansionary as possible”. The Bank of Korea has already cut its benchmark rate to match a record low. Government spending has been a key source of support for the economy, offsetting a pullback in private investment. The proposal to raise 2020 spending came after the government implemented a supplementary budget in the second half of this year.

Hong Kong’s embattled government has responded to recession with a range of fiscal measures aimed at shoring up business confidence and households. The HK$4 billion (S$695 million) package announced on Wednesday brings the total since June to about HK$25 billion. The government now expects to run a rare budget deficit this fiscal year. Still, given the city’s structural problems and the sharpness of the downturn, economists and the International Monetary Fund say the response has been insufficient.

The government has taken a series of steps to boost an economy on pace for its slowest growth in five years. Last week, the Cabinet passed a fresh round of stimulus that aims to spur over 100 billion baht (S$4.5 billion) of spending. That follows a US$10 billion package in August that included help for farmers and low-wage earners, as well as initiatives to bolster consumer spending and investment. About one-third of the package will come from the government budget.

A slump in revenue is pushing the budget deficit closer to the legal limit of 3 per cent of GDP. But the government has increased this year’s deficit target to as much as 2.2 per cent of GDP and is ready to raise next year’s projection as well, Deputy Finance Minister Suahasil Nazara said. President Joko Widodo is also pushing structural and tax reforms to attract investment.

“Rather than a huge spending spree, the fiscal help you’re likely to see is more on a tax-reduction point of view. They’re going to try to put less burden on the economy,” said senior economist Trinh Nguyen at Natixis Asia. “That is a much better approach than trying to deploy fiscal expenditure when you don’t have space and investors may be turned off.”