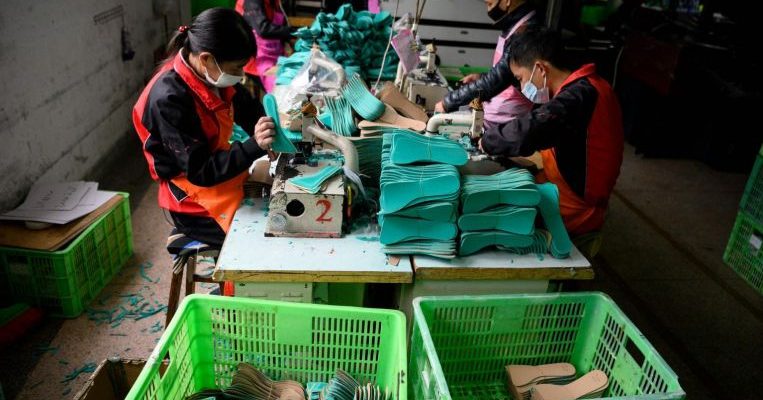 BEIJING (REUTERS) – Factory activity in China contracted at the fastest pace on record in February, highlighting the damage from the on the world’s second-largest economy.

China’s official Purchasing Managers’ Index (PMI) fell to a record low of 35.7 in February from 50.0 in January, the National Bureau of Statistics said on Saturday (Feb 29), well below the 50-point mark that separates monthly growth from contraction.

Analysts polled by Reuters expected the February PMI to come in at 46.0.

The sombre readings provide the first official snapshot of the state of the Chinese economy since the outbreak of the coronavirus epidemic which has killed almost 3,000 people in mainland China and infected about 80,000.

The results suggest deepening cracks in an economy already hit by the trade war as the coronavirus forces widespread transport curbs and tough public health measures which have paralysed economic activity.

China’s economy is widely expected to suffer another sharp blow in the first quarter of this year, pressuring policymakers to unveil more stimulus measures.

Nomura expects first-quarter growth to be at 2.0 per cent year-on-year while Capital Economics estimates China’s economy would contract outright in year-on-year terms this quarter, for the first time since at least the 1990s.

A sub-index of manufacturing production nosedived to 27.8 in February from January’s 51.3 while a reading of new orders plunged to 29.3, down from 51.4 a month earlier.

Factories continued to lose jobs at the fastest pace in years as labour conditions remained tight amid the travel restrictions.

China’s leaders have urged local governments, factories and workers to re-start operations as soon as possible in less affected regions. But the response has been slow and many migrant workers – including those in worst-hit Hubei province – have yet to return to work due to stringent quarantine rules and ongoing travel bans.

Official data showed that only about 30 per cent of China’s small- and medium-sized companies had resumed production as of Wednesday. Some firms that have restarted work are reportedly running below normal capacity.

Small- and mid-size firms account for more than 80 per cent of nationwide employment and over 60 per cent of gross domestic product.

As the coronavirus spreads to more countries, some analysts have warned that the impact on global supply chains could risk dampening the subsequent recovery for Chinese manufacturers.

“Even if labour shortages in China start to ease, some factories may run into problems resuming normal production if outbreaks in other countries mean they have trouble sourcing intermediate goods,” Julian Evans-Pritchard, senior China economist at Capital Economics, said in a note on Friday.

Economists at Morgan Stanley have warned of a pronounced impact on first-quarter global growth, with rising risks of it extending into the second quarter this year.

China’s economy has transitioned more towards services since the SARS coronavirus epidemic in 2002-2003, and the sector now accounts for about 60 per cent of the country’s Gross Domestic Product (GDP).

Transportation, tourism, catering and entertainment sectors have been hard hit during the coronavirus outbreak as people avoid crowded areas.

A sub-index of construction activity, a key driver of growth, stood at 26.6, down from 59.7 in January.