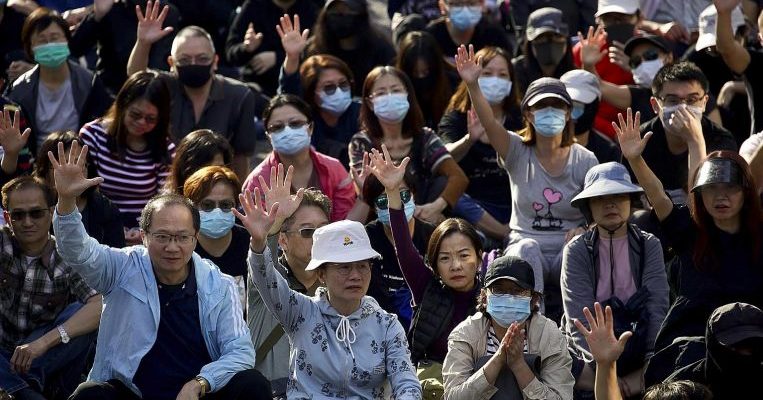 HONG KONG • Secondary school students and retirees joined forces to protest in Hong Kong yesterday, the first of several weekend rallies, as pro-democracy activists vowed to battle what they say are police brutality and unlawful arrests.

A top Hong Kong official said the government was looking into setting up an independent committee to review the handling of the crisis, which has seen increasingly violent demonstrations since starting more than five months ago.

Hong Kong has been relatively calm since local polls last Sunday delivered an overwhelming victory to pro-democracy candidates. Still, activists appear keen to maintain the momentum of their movement.

“I came out for the peaceful protest in June when there were more than one million people, but the government did not listen to our demands,” said a 71-year-old woman in Central district, who gave her name as Ponn.

She had brought her own plastic stool to join a cross-generational protest of a few hundred people at the city’s Chater Garden.

Elderly Hong Kongers, some with visors and canes, stood not far from young, black-clad protesters. All listened to pro-democracy speakers in a gathering marked by a festive mood.

“I have seen so much police brutality and unlawful arrests. This is not the Hong Kong I know. I came today because I want the government to know that we are not happy with what they have done to our generation,” said Madam Ponn, who was at the rally with her daughter and son-in-law.

NOT THE HONG KONG I KNOW

I have seen so much police brutality and unlawful arrests. This is not the Hong Kong I know. I came today because I want the government to know that we are not happy with what they have done to our generation.

MADAM PONN, a 71-year-old woman in Hong Kong’s Central district, on pro-democracy protests in the city.

But it was not all calm elsewhere in Hong Kong yesterday.

A woman was apparently hit in the face by a pepper ball fired by riot police near Prince Edward MTR station where protesters had set up barricades in the middle of the road, RTHK reported.

Demonstrators are angered by what they see as Chinese interference in freedoms promised when Britain returned Hong Kong to Beijing in 1997.

But China denies interfering, and says it is committed to the “one country, two systems” formula put in place at the time of the handover. It has blamed foreign forces for fomenting unrest.

Yesterday, citing the authorities, the Communist Party newspaper of the southern Chinese city of Guangzhou said police had arrested a citizen of Belize for allegedly colluding with people in the US to meddle in Hong Kong affairs.

Mr Lee Henley Hu Xiang, a Belizean businessman who lives in China, had funded key members of “hostile forces” in the United States to undermine China’s national security, and supported activities that led to chaos in Hong Kong, the Southern Daily said.

Separately, the newspaper said a Taiwanese man, Mr Lee Meng-chu, was arrested by police in nearby Shenzhen on Oct 31, for allegedly stealing state secrets for foreign forces after he made a trip to Hong Kong in August to support “anti-China” activities.

In Hong Kong, the city government is looking into setting up an independent committee to review the handling of the crisis, Mr Matthew Cheung, Chief Secretary for Administration, told reporters when asked about an independent review committee.

“We are looking for relevant candidates and we have already started preparatory work, so we hope we will make some progress in the short term,” Mr Cheung said.

Meanwhile, three anti-government marches set for today have been approved by police.