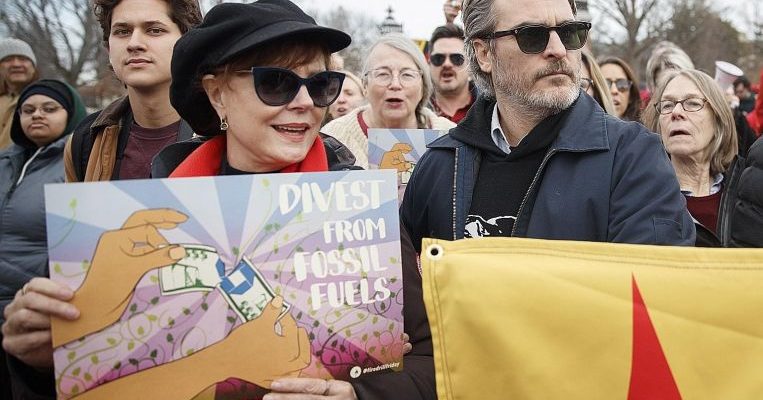 WASHINGTON • Veteran activist and actress Jane Fonda was joined by fellow Hollywood stars Joaquin Phoenix, Susan Sarandon and Martin Sheen at the foot of the US Capitol building in Washington on Friday, where they demanded action on climate change alongside other protesters.

“The climate crisis makes our nation and all nations less secure,” said Fonda, sporting a red hat as she was cheered on by a crowd that included Sheen. She also spoke of the fires in Australia, which have ravaged tens of thousands in square kilometres of bushland and caused at least 26 deaths.

In Sydney earlier on Friday, thousands of angry protesters had demanded that the Australian government do more to combat climate change.

Last week, Phoenix used his acceptance speech at the Golden Globes – where he won an award for best actor in a drama film – to call on people to make “sacrifices” to slow down global warming.

He returned to the theme at the rally.”The meat and dairy industry is the third leading cause of climate change,” he said.”There is something that you can do today, right now and tomorrow by making your choice about what you consume.”

This year is the most crucial one yet for humanity’s plan to dodge the bullet of catastrophic global warming, experts said yesterday, warning that the narrow path to safety was riddled with pitfalls, from the US election to Brexit.

When nations struck the 2015 Paris Agreement, which aims to limit temperature rises under 2 deg C, they agreed on five-year periods in which climate action could be implemented, assessed and boosted; 2020 is the year the landmark deal goes into effect, yet the diplomatic wrangling over almost three decades has fallen far short of what science says is needed to avert disastrous climate change.