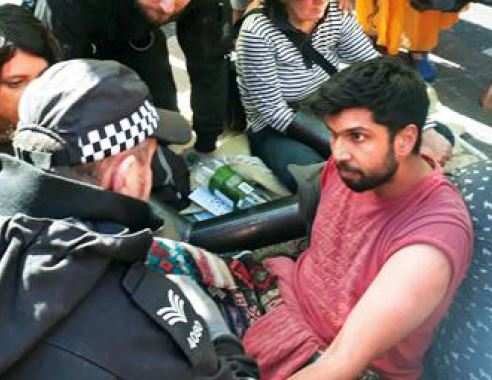 LONDON: More than 700 climate change activists blocking roads at some of ‘s most famous landmarks have been arrested over the last six days, police said on Saturday, up from a total given on Friday of more than 682.
The Extinction Rebellion protests started on Monday and have at times paralyzed parts of London, with peaceful demonstrations at Waterloo Bridge, Oxford Circus and other key landmarks.
Among the arrested was Delhi-born Jahan Jhala, 27. Jhala, who moved to UK from India at the age of 10 and is now a British citizen, was among the 30-odd demonstrators who were continuing to protest at the Oxford Circus on Saturday despite the removal of a pink boat, which had acted as a focal point for the movement.
Several British police officers reached the spot where Jhala and other “eco-warriors” had tied themselves up using metal pipes. It took cops more than an hour and a chainsaw to unlock him from a fellow protester. Even after that he refused to get up and lay on the ground, forcing police to lift him and carry him to a police van. Before being arrested, he told TOI: “My parents know I am here and my dad does not mind if I get arrested. We want to fill up the police cells so the police will go to the government and say we can’t cope anymore. A lot of this is inspired by Gandhi. Non-violent civil disobedience is the way forward.” His father Ajai Jhala is ex-CEO of BBDO India, a leading advertising agency.
On Friday, star Emma Thompson had joined activists at Oxford Circus, one of London’s most popular shopping districts.
In Video: