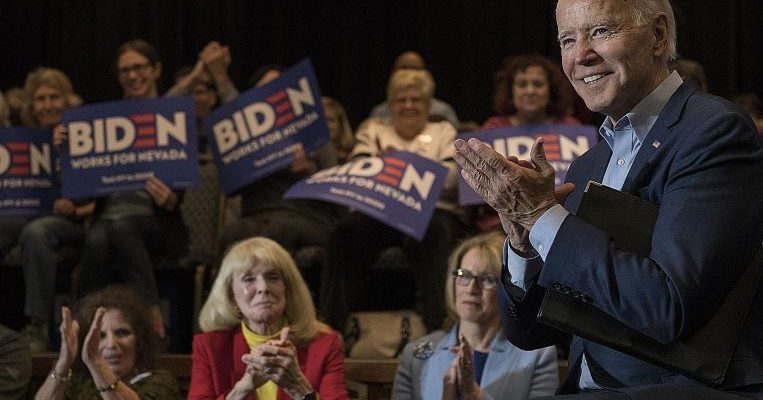 It was a Tuesday evening last month and he had limped into Las Vegas, bruised from his disappointing showings in the Iowa and New Hampshire nominating contests.

But at Harbour Palace Seafood Restaurant, a crowd of retirees had packed in to see the 77-year-old former US vice-president, forming a line that snaked out the door.

“I don’t like Warren and I don’t like Bernie because they want ‘Medicare for All’,” said Mr Alan Davis, 80, dismissing the single-payer healthcare system promoted by Senator Bernie Sanders, 78.

Mr Biden is “really human. He can feel how an ordinary person feels”, said Ms Minerva Honkala, a retired teacher who said she was “65-plus”.

Mr Biden’s ability to connect with Ms Honkala’s age group – through his resume and more centrist tendencies, his talk of shared values and his perceived general election promise – helped him regain his footing in Nevada, surge to victory in South Carolina and catapult to his perch as the Democratic Party’s likely presidential nominee.

It was a rapid reversal of fortunes fuelled by overwhelming support first from older black voters and, ultimately, from older voters more broadly, a key part of Mr Biden’s larger coalition.

Now that age group is in the spotlight as the nation confronts the staggering costs of the coronavirus pandemic. It is a vulnerable population in terms of the health crisis – and has become the focus of the public conversation. Health officials are pleading for young people to stay home to protect their parents and grandparents.

But politically, the primary results this election season have highlighted the extraordinary, sustained power of older Americans: Exit polls, surveys and interviews with political strategists and demographers show that the concerns and preferences of these voters have played a critical role in defining the trajectory of the Democratic race so far, and are poised to do so in the general election as well.

In Florida, a state with a significant retiree population, Mr Biden won the Democratic primary this month by nearly 40 percentage points, a reflection of both his momentum in the race and his strength with constituencies including more moderate Latino voters, African Americans and college-educated white suburbanites.

Among voters aged 65 and over, Mr Biden’s advantage was even starker: He was the choice of 70 per cent of those voters, while 5 per cent said the same of Mr Sanders, according to a National Election Pool pre-election survey of Florida voters.

Younger voters have had “tremendous influence” in shaping the contours of the Democratic debate, pushing boldly progressive ideas on matters like student loan debt reform to the fore, said Mr John Della Volpe, the director of polling at Harvard Kennedy School’s Institute of Politics.

When it comes to electoral outcomes, however, young people are being outflanked. “Rather than increasing their influence in 2020, what’s happened is, their parents and grandparents have increased their influence,” he said.

Those Democratic grandparents, especially, tend to be more moderate, more swayed by traditional government experience and more keenly focused on the tactics they believe are needed to defeat President Donald Trump, strategists and pollsters said.

Mr Biden, who once faced significant competition for the votes of older Americans, emerged in recent weeks as the dominant front runner among those highly committed Democratic voters who have now helped bring him to the cusp of his party’s presidential nomination.

Older voters have punched above their political weight for years, with turnout among those 65 and older often double, or more, that of the youngest voters. And as Americans age and become more rooted in their communities, political participation tends to rise with their stake in society.

Even in the midterm elections in 2018, hailed as a high-water mark for youth voting because the share of 18-to 24-year-olds nearly doubled from the previous midterm election, the gap with older voters remained about the same. About 66 per cent of eligible older people turned out, compared with about 36 per cent of those aged 18 to 24, said Mr William Frey, a demographer at the Brookings Institution.

However, Mr Sanders, the overwhelming favourite with younger voters, is continuing to campaign. And while the Vermont senator has acknowledged that younger voters did not appear to turn out at the rate he had hoped for, polls and exit surveys show that Mr Biden faces major challenges with that constituency, a liberal slice of the electorate that, his advisers acknowledge, he will need to energise if he is the nominee.

His standing with older voters is also poised to look different in a general election, where that demographic is again influential – but traditionally has tilted much more conservative.

“The irony is that the pattern is about to reverse in the general,” Ms Lake said, pointing to Mr Trump’s overall strength with older voters, even as she added that “Donald Trump is despised by younger voters”.

Seniors also show up to vote, particularly in swing states. In Michigan and Wisconsin, turnout among older voters was higher than the national average for that age group, according to Mr Frey. In Michigan, for example, 74 per cent of older eligible voters turned out, compared with just 38 per cent of 18-to 24-year-old eligible voters.

This presents a challenge for Mr Biden, should he win the nomination: How to get younger voters to turn out for him, and persuading their older counterparts to vote for him over Mr Trump.