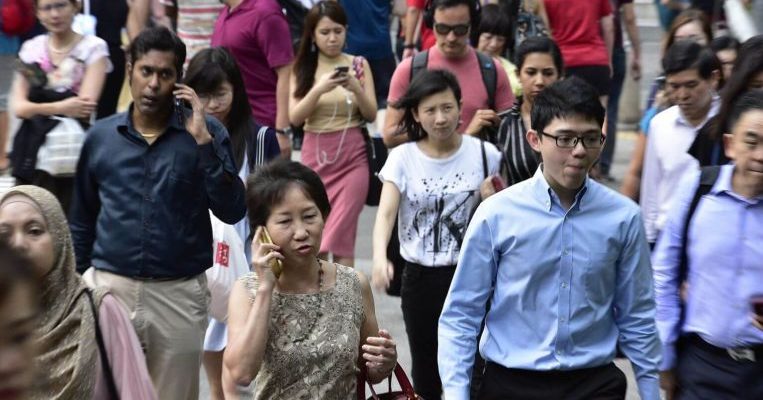 SINGAPORE – There was no spike in layoffs despite the economic slowdown but job seekers faced a tougher slog in the first half of this year.

This was the picture painted by the latest labour market data released by the Ministry of Manpower (MOM) on Thursday (Sept 12) which showed citizen and resident unemployment rates inching up and job openings declining.

“Final data confirmed that employers are retaining their existing workers despite economic headwinds… At the same time, hiring sentiments have turned cautious,” said the ministry in its report.

The number of job vacancies declined for the second consecutive quarter to 47,700 in June, down from 57,100 in March, after accounting for seasonal variations.

This resulted in the ratio of job vacancies to unemployed people dipping below one for the first time in more than a year. There was 0.94 opening per unemployed person in June.

The softer job market was also borne out in the lower share of residents who managed to find a job within six months of being laid off in the last quarter of last year.

But the long-term unemployment rate for residents stayed flat at 0.7 per cent in June after being adjusted for seasonal variations. This refers to the share of residents who were unemployed for at least 25 weeks.

The seasonally adjusted unemployment rate for Singaporeans climbed for the third consecutive quarter to 3.3 per cent in June, up from 3.2 per cent in March.

But this was due to . The number of retrenchments in the second quarter dipped below the levels in the preceding four quarters.

The top reason cited by companies for laying off workers remained restructuring and reorganisation.

Professionals, managers, executives and technicians continued to make up the majority of locals retrenched, at 77 per cent.

The MOM noted that in the recent three quarters, more employees have been placed on short work-week or temporary layoff arrangements, which are typically viewed as better alternatives to retrenchments.

“This points to firms’ growing caution amid uncertain economic conditions, though levels were still much lower than during recessionary periods,” it said.

Meanwhile, growth in the number of people working here, excluding maids, slowed in the first half of the year to 16,900, down from 31,400 in the second half of last year, which had been boosted by the festive season, said the ministry.

The MOM attributed this mainly to growth in the service and construction sectors. More than half of the increase, or 6,400, was from work permit holders. There were also 3,200 more employment pass holders.

Local employment grew by 5,300 in the first half, especially in sectors such as community, social and personal services, professional services, financial and insurance services, and information and communications. This was down from 20,900 in the second half of last year, and 6,500 a year ago.

The MOM said in a statement that the manufacturing sector shed 4,700 workers in the first half of the year, and the hiring outlook is likely to remain cautious due to weak global demand for semiconductors.

However, the aerospace and food and beverage manufacturing segments should continue to do well.

The construction sector continued to recover, adding 2 ,800 workers in the first half of the year. The ministry said construction output is likely to see a turnaround this year after three consecutive years of contraction, which should support employment growth in the sector.

In the service sector, which added 19,000 workers in the first half, employment growth is expected in both outward-oriented and domestic-oriented segments, supported by demand for enterprise information technology solutions and payment processing services, as well as the ramp-up of operations in healthcare facilities.

National Trades Union Congress assistant secretary-general Patrick Tay said in a Facebook post on Thursday that there was a weakening of the labour market in the first half of the year even though there was no huge spike in retrenchments compared with the first half of last year.

“I expect companies and businesses to be more conservative and cautious, especially in hiring in the latter half of 2019 with the continued United States-China trade tensions,” he said.

“As the labour market weakens, it will be crucial for companies and employers to partner the labour movement and our affiliated unions to upskill, reskill and second-skill workers so that they stay engaged, empowered, employed and employable,” he said.