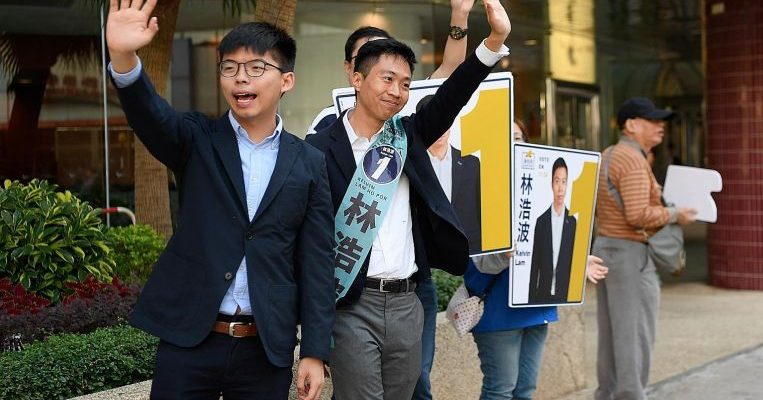 HONG KONG • An uneasy calm settled over Hong Kong yesterday as the city prepared to go to the polls for local elections seen as a referendum on months of violent anti-government protests.

On the grounds of the besieged Hong Kong Polytechnic University (PolyU) on the Kowloon peninsula, a dwindling number of protesters desperately sought a way out, while others vowed not to surrender, nearly two weeks after some of the worst violence since anti-government demonstrations escalated in June.

One student protester who escaped the police cordon around the university without being arrested said yesterday, referring to the elections: “I don’t feel optimistic about the outcome at all… I cannot see the end in sight.”

A 21-year-old student, who was shot by police during street protests, yesterday called on voters to come out in force to cast their ballots in the elections to “earn more democracy”.

Mr Chow Pak Kwan, who was shot in the abdomen by a traffic police officer on Nov 11, was discharged from hospital last Wednesday after having one of his kidneys and part of his liver removed as a result of his wound.

“I hope Hong Kong people can cast their votes to earn more democracy in a peaceful way,” Mr Chow, masked and dressed in the black colours of the city’s pro-democracy movement, told reporters yesterday.

Young pro-democracy activists are running in some of the seats that were once uncontested and dominated by pro-Beijing candidates.

One pro-democracy candidate for the Wan Chai district council, Mr Chris Chan, said: “It is time for us to calm down and tell the government in a civilised way what we want to do.”

At PolyU, rotting rubbish and boxes of unused petrol bombs littered the campus.

“It is very dangerous inside, as the hygiene has been very bad and a lot of strongly explosive chemicals have been missing. PolyU is now a highly dangerous campus,” he said.

At a Chinese People’s Liberation Army (PLA) barracks bordering PolyU, dozens of soldiers in riot gear were seen practising drills, according to a Reuters witness.

The soldiers carried shields and wore helmets with face guards. PLA soldiers have not publicly engaged in anti-riot efforts on the streets of Hong Kong, but such drills suggest a high degree of preparedness amid the current protests.

What’s at stake in the polls

The surge in violence across Hong Kong could derail today’s District Council Ordinary Election. Here are some key facts.

WHAT DOES A DISTRICT COUNCIL DO?

The functions of a district council include advising the government on matters affecting residents’ well-being, the adequacy and priorities of government programmes for the district, and the use of public funds allocated to the district for public works and community activities.

There are 479 district council members, comprising 452 elected members and 27 ex-officio members who are rural committee chairmen in the New Territories. In all, 1,090 candidates are jockeying for 452 positions in all 18 district councils, with more than 4.13 million eligible voters.

District councillors wield little real power, with no authority to pass laws or decide on government policies. But their seats make up a sizeable portion of the committee that selects the Hong Kong chief executive, with the other half picked by the Chinese government.

WHERE DO THE PARTIES STAND?

Support for traditional pan-democratic parties such as the Democratic Party and the Civic Party has remained largely unchanged this past year, according to a Pori survey on support for Hong Kong’s top 10 political groups, while parties that voters perceive to be more radical (Demosisto and People Power) are seeing their support rising. Ms Tiffany Yuen, former vice-chairman of Demosisto, a political party co-founded by democracy activist Joshua Wong, is competing for a seat. Wong was last month barred from running.