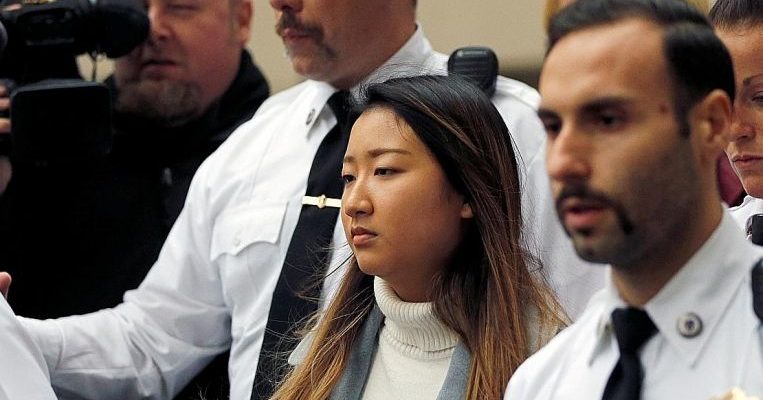 BOSTON • The young woman stood almost frozen, her hands clasped in front of her, as the prosecutor read from her text messages to her college boyfriend.

Filled with expletives, and frequently in all caps, the messages read like one long outpouring of rage.

She asked him to “do everyone a favour” and go kill himself, repeatedly called him “worthless”, and threatened to harm herself if he did not do what she wanted.

According to court documents, the young woman, Inyoung You, demanded in a message at 1.25pm on May 18: “u can’t figure it out? u wanna make me livid again? u want me to slash my throat? Is that what you want?”

Two days later, her boyfriend, Mr Alexander Urtula, 22, killed himself by jumping from the roof of a parking garage in the Roxbury neighbourhood of Boston, on the day of his graduation. Both were students at Boston College.

The local district attorney has charged You, 21, with involuntary manslaughter, arguing that her psychological treatment of Mr Urtula over the course of an 18-month relationship was wanton and reckless and that it created life-threatening conditions that she had a duty to alleviate.

The case has raised questions about the role of one person’s words or actions in another person’s suicide, about youthful relationships that unspool in mind-boggling numbers of text messages, and about the use of those messages in a criminal prosecution.

You, who withdrew from classes in August, was in South Korea when prosecutors announced the charges last month. She has since voluntarily returned to the United States.

She appeared in court on Friday wearing black pants and loafers and a long, light blue coat, her face fixed in a frown. Through her lawyer, she pleaded not guilty to the charge. She did not speak, except to utter a quiet “ow” when she was handcuffed.

u can’t figure it out? u wanna make me livid again? u want me to slash my throat? Is that what you want?

INYOUNG YOU, in a text message to Mr Alexander Urtula two days before his death, according to court documents.

When the facts come out, it will be clear that these two young individuals were very needy emotionally and were involved in a relationship that became a toxic blend of fear, anger, need and love.

YOU’S LAWYER STEVEN KIM, who accused the prosecutor of painting “a fragile 21-year-old as a monster to the entire world” in “a cheap pursuit of headlines”.

At the centre of the prosecution’s case are 75,337 text messages that the couple exchanged in the two months before Mr Urtula’s death. More than 47,000 were from You, said prosecutors.

You’s representatives have argued that the prosecution has cherry-picked from the text messages between the couple to make its case and that other messages suggest a different picture.

In recent days, a public relations firm representing You shared with The Boston Globe what it said were the text messages that You and Mr Urtula exchanged on the morning that he killed himself. In the messages, You appeared to be trying to stop him.

Speaking to reporters after the arraignment, her lawyer Steven Kim accused the prosecutor of painting “a fragile 21-year-old as a monster to the entire world” in “a cheap pursuit of headlines”.

“When the facts come out,” Mr Kim said, “it will be clear that these two young individuals were very needy emotionally and were involved in a relationship that became a toxic blend of fear, anger, need and love.”

But Ms Caitlin Grasso, an assistant district attorney, described the relationship differently. She said it was one of persistent abuse and that, in the weeks before Mr Urtula’s death, You repeatedly told him to kill himself.

She said the couple had started dating in late 2017 or early last year after meeting through the Philippine Society of Boston College, a student organisation dedicated to fostering Filipino culture on campus.

Some months into their relationship, Ms Grasso said, You discovered that Mr Urtula had not been truthful about continuing to communicate and socialise with a former girlfriend who was also a Boston College student, and the relationship shifted.

From that point on, Ms Grasso said, You abused Mr Urtula psychologically and verbally and frequently threatened to harm or kill herself in order to manipulate him. Witnesses said that Mr Urtula would often leave social gatherings because she had texted him saying she was going to hurt herself, according to Ms Grasso.

If Mr Urtula did not respond fast enough to her calls or text messages, or if he asked for space in an argument or for permission to go to sleep, she would threaten to harm or kill herself.

By March, You had isolated Mr Urtula from his college friends, Ms Grasso said, requiring him to block their telephone numbers and block them on social media.

Ms Grasso said Mr Urtula, who had no documented mental health issues before the relationship, was breaking under the stress.

Late on the night of March 31, Mr Urtula texted You, saying: “I asked you to stop so many times.”

He added: “I’m breaking down and I’m scared.”

He said he was having “the worst anxiety attack of my life” and was curled in a ball on the couch.

“All the voices are so loud,” he wrote, using an expletive, “and they all have your voice.” “I want you and the voices to stop,” Mr Urtula’s messages went on. “To stop telling me how worthless and pathetic I am” and “how much I deserve to die.”

The case has drawn comparisons to that of Michelle Carter, who was convicted of involuntary manslaughter in Massachusetts in 2017 for having urged a close friend, Conrad Roy III, in text messages to kill himself. Carter was 17 at the time.

Massachusetts is among a small group of states that does not have a law making it a crime for someone to assist or coerce another person into killing themselves. That is why prosecutors charged Carter and You with a much broader crime, involuntary manslaughter. Involuntary manslaughter carries a maximum sentence of 20 years in prison.