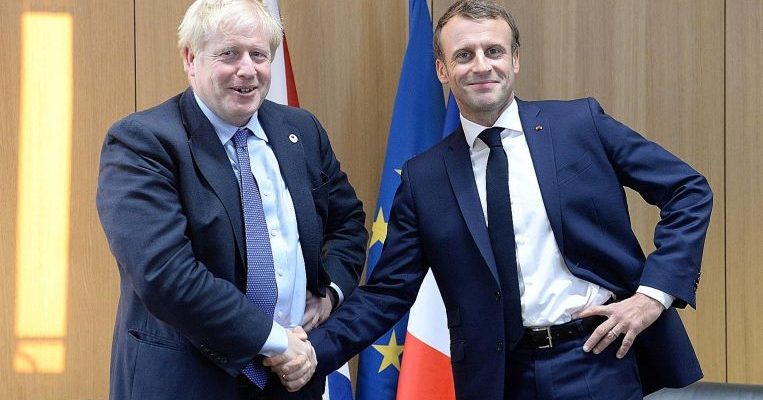 BRUSSELS • When British Prime Minister Boris Johnson first coined his slogan “Get Brexit Done”, the President of France probably was not top of the list of people he thought he could turn to for help.

After all, for three years, Mr Emmanuel Macron has portrayed himself as the European Union’s saviour, standing up against the populists and the nationalists on the continent inspired by Brexit and excited by anything that tugs at the threads of EU cohesion.

Now the two men are forming an informal bond over getting Britain out of the EU sooner rather than later. France is holding up .

That might sound like an unusual way to help out a British prime minister, but in the strange logic of Brexit, that is exactly how it works.

Mr Johnson does not really want the extension he has asked for – he only submitted the request after being boxed in by his opponents in the UK Parliament. The British Premier would rather have a hard deadline and the risk of a chaotic no-deal exit to force lawmakers to endorse his withdrawal plans.

Mr Macron gets that. And he is happy to oblige because on that point at least, their interests are aligned.

It is not the way observers thought Brexit was going to turn out. From the very start of the negotiations in July 2017, two months after Mr Macron’s shock election victory upended the old political order in France, Paris has mostly taken the hardest line on Brexit, frequently to the annoyance of other European governments.

From cooperation on financial services to divvying up fishing waters, the UK’s oldest rival has been the most stubborn negotiator.

So Mr Macron knows that acting tough on Brexit plays well domestically. And with Germany stuck in a political rut, getting the UK out of the club will help his efforts to reshape the EU along French lines.

But the dynamic changed when Mr Johnson replaced Mrs Theresa May, who had struggled to strike up a rapport with European leaders – earning only respect, sympathy and, at times, disdain.

Mr Johnson’s personal chemistry with Mr Macron was evident from the outset. At the Group of Seven meeting in Biarritz, France, in August, the French President laughed heartily as Mr Johnson regaled him with stories in his best French.

They agreed on several global issues, and spoke warmly about each other afterwards.

“He’s a leader who demonstrates real strategic thinking and who has shown commitment and willingness to deliver,” Mr Macron said after an EU summit in Brussels this month. “Those who didn’t take him seriously were wrong, and will continue to be wrong.”

Those who didn’t take him seriously were wrong, and will continue to be wrong.

Neither Mr Macron nor Mr Johnson is a typical leader. Though both are deeply rooted in their countries’ establishments – Eton and Oxford for Mr Johnson, France’s National School of Administration for Mr Macron – both see themselves as outsiders.

Mr Johnson spent most of his career on the fringes of the Conservative Party, only really taken semi-seriously. Mr Macron set up his own movement to jump the queue to the French presidency and smashed the country’s traditional two-party system in the process.

For now, a British prime minister has found a French leader he can see eye to eye with on Europe. As Brexit enters its endgame, both are keeping the world guessing about their real intentions. And the rest of the EU is every bit as annoyed with France as it is with the UK, one EU official said.