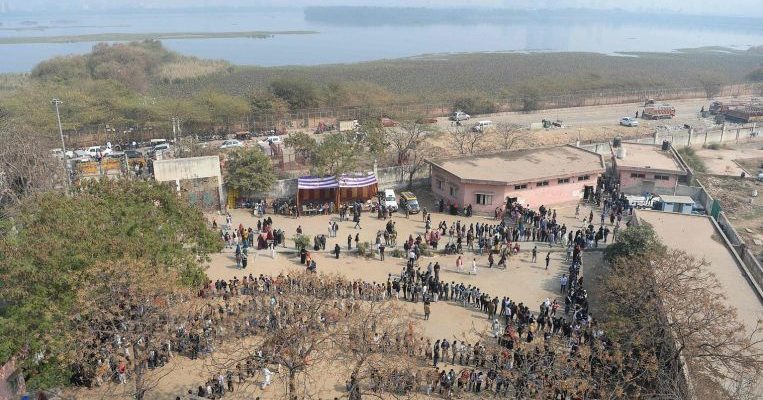 Millions of voters, including a 111-year-old woman, turned up to cast their ballots yesterday in the Indian capital, Delhi, where Prime Minister Narendra Modi’s Bharatiya Janata Party (BJP) has waged a high-stakes campaign in an effort to reverse a string of electoral setbacks at the state level.

The results, which will be out on Tuesday, will also be an indicator of how the controversial Citizenship Amendment Act (CAA) has affected the BJP politically. The CAA, which has triggered protests nationwide, grants citizenship to non-Muslims from Pakistan, Afghanistan and Bangladesh. It has been denounced as discriminatory and not in keeping with India’s secular Constitution.

Yet the high-octane campaign did not do anything for turnout, with 54.65 per cent of 14.7 million eligible voters casting their ballots at the end of polling. In the last election in 2015, turnout was 67.47 per cent.

Both Mr Modi and Delhi Chief Minister Arvind Kejriwal, who leads the ruling Aam Aadmi Party (AAP) in the capital, had urged voters, particularly youth and women, to turn up and vote.

Six exit polls predicted an AAP win, giving between 41 to 63 seats for the AAP, and up to 28 seats for the BJP. The majority mark is 36. Exit polls in the past have been proven wrong.

“For me, it’s local issues (that matter). Tomorrow, if I am not safe within my house, how does it matter if there is national security? I want a clean environment for my child,” said Ms Suchi Smita Mishra. The 39-year-old, who works for a non-profit, voted at a polling station in Vasant Kunj, an upwardly mobile residential locality in South Delhi.

But others felt that national issues were important. “When our country is safe, we are safe. National issues first,” said 70-year-old Ms Sushma Mehtani, who proudly displayed her index finger which was daubed in indelible ink, a measure to prevent electoral fraud.

Voters in Delhi, which is the seat of federal power and also has a 70-seat state assembly, were wooed in a campaign that covered both national and state issues.

In state elections in India, local issues and local candidates usually dominate. But in the Delhi polls, the BJP, which is in federal power, campaigned on national issues.

Keen to reverse its electoral fortunes at the state level after losing in recent elections in Jharkhand and Maharashtra, the BJP focused on national security with references to keeping India safe from Pakistan. It also called into question the patriotism of those who had questioned the CAA.

The campaign saw two men threaten anti-CAA protesters with guns in what critics said was a fallout of the polarising campaign.

Once a force in Delhi, the Congress has been unable to get any traction in the Delhi polls.

The AAP focused on its work on local issues, from improving education and health infrastructure to subsidising electricity and water bills. And it dangled further sops at voters, including free bus travel for students.

Mr Kejriwal hoped that people would vote on the basis of the work done by his government.

“I am hopeful that Aam Aadmi Party will come back to power for the third time,” he told reporters after casting his vote.

Delhi also has many high-profile voters. Among those who cast their ballots were Foreign Minister S. Jaishankar and Congress president Rahul Gandhi as well as his sister Priyanka Gandhi.

Voting remained largely peaceful, with extra security at polling booths in Shaheen Bagh, which is at the centre of anti-CAA protests.

Analysts said that the results would show whether voters were swayed by the BJP’s campaign on national issues or remained focused on local issues.

“Within six months of winning an enhanced mandate (in the general election), the BJP began faltering and it started facing difficulties. Definitely it is nervous, and this is showing in extreme aggression (in the campaign),” said Mr Nilanjan Mukhopadhyay, a political analyst and Mr Modi’s biographer.

“I don’t see this election as a test of Prime Minister Modi’s personal popularity, but a test of the way Mr Modi is running the government (like the CAA).”