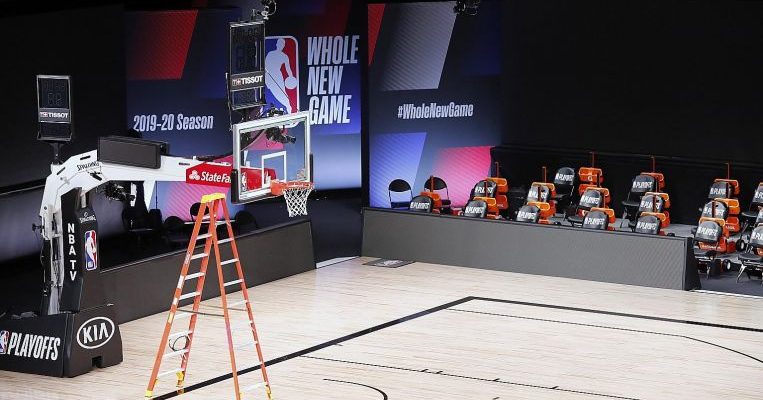 NEW YORK • The National Basketball Association announced a plan to convert some of its arenas into polling places for the November election as part of an agreement with its players’ union to resume play-offs yesterday, union and league officials said in a joint statement.

“We had a candid, impassioned and productive conversation yesterday between NBA players, coaches and team governors regarding next steps to further our collective efforts and actions in support of social justice and racial equality,” said the statement on Friday signed by NBA commissioner Adam Silver and the players’ union executive director Michele Roberts.

The announcement came two days after NBA players staged a dramatic work stoppage in response to the police shooting of Mr Jacob Blake, a black man, in Kenosha, Wisconsin.

Oklahoma City Thunder guard Chris Paul, the players’ union president, said on Friday that he had never experienced anything like this in his 15 years in the league.

He said: “We’re all tired of seeing the same thing over and over again, and everybody just expects us to be okay just because we get paid great money.

“You know, we’re human. We have real feelings. And I’m glad that we got the chance to get in a room together to talk with one another.”

The plan to use arenas as polling places applies only where the arenas are controlled by NBA team owners, who agreed to work with local officials to make it happen.

In places where the deadline to do so has passed, the owners plan to work with officials to convert the arenas, largely unused amid the coronavirus pandemic, into outlets for other election-related activities, such as voter registration.

Establishing more polling locations was a key goal of More Than A Vote, the initiative by Los Angeles Lakers superstar LeBron James and other athletes to protect voting rights and increase civic engagement, particularly among black people.

Last month, the Milwaukee Bucks offered Fiserv Forum arena as a polling location, in partnership with the group led by James.

Some NBA arenas, such as TD Garden in Boston, are not owned outright by the NBA team that plays in it, whereas Madison Square Garden, for example, is owned by Mr James Dolan, owner of the New York Knicks.

Some teams already have their own plans under way.

In June, the Atlanta Hawks announced an initiative in partnership with Fulton County to turn State Farm Arena in Atlanta into an early voting polling location from July 20 for a primary run-off election, following a June primary that was marred with problems like exceptionally long lines.