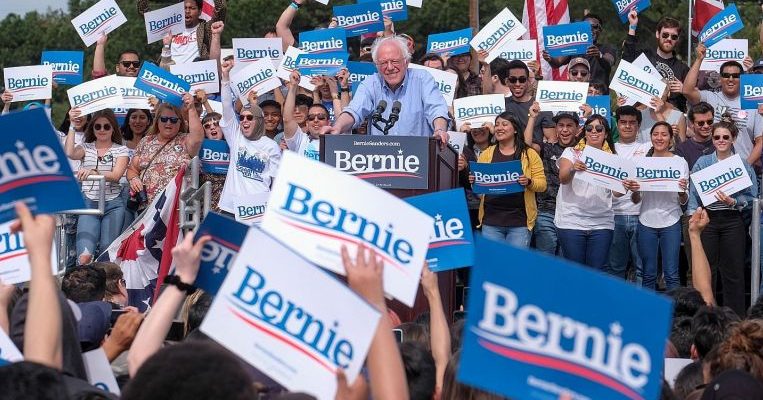 WASHINGTON • Russia has been trying to intervene in the Democratic primaries to aid Senator Bernie Sanders, according to people familiar with the matter, and Mr Sanders has said that intelligence officials recently briefed him.

The disclosure came a day before yesterday’s caucuses in Nevada, where Mr Sanders is a favourite. It followed revelations a day earlier that Moscow was interfering on President Donald Trump’s behalf this year, as it did in 2016.

Mr Sanders on Friday denounced Russia in a statement, calling President Vladimir Putin an “autocratic thug” and warning Moscow to stay out of the election. Drawing a contrast with Mr Trump, he said he would stand against any efforts by Russia or another foreign power to interfere in the vote.

“The intelligence community is telling us they are interfering in this campaign right now in 2020,” Mr Sanders separately told reporters in Bakersfield, California, where he was to hold a rally. “And what I say to Mr Putin: ‘If elected president, trust me, you are not going to be interfering in American elections.'”

He said he was briefed about a month ago. Asked why the disclosure came out now, he said: “I’ll let you guess, about one day before the Nevada caucus. Why do you think it came out?”

On Friday, the President aggressively disputed that Russia was interfering on his behalf. He called the disclosures a hoax and part of a partisan campaign against him.

At a campaign rally in Las Vegas, Mr Trump suggested that Mr Putin would prefer Mr Sanders, “who honeymooned in Moscow”.

Mr Sanders and his wife travelled to the Soviet Union in 1988 on a trip that political opponents have called their honeymoon, a term the couple has jokingly used, too.

Russia’s interference on behalf of both Mr Trump, the dominant force in the Republican Party, and Mr Sanders, a stalwart of the left, underscores its efforts to sow chaos across the political spectrum. Undermining the democratic system remains at the core of Russia’s effort to raise its own stature by weakening the United States, according to current and former officials.

In briefings to House Intelligence Committee members two weeks ago, and to Mr Sanders, officials said that Russia was actively interfering in the campaign, and people at the House briefing said that intelligence officials said Russia had a preference for Mr Trump.

And what I say to Mr Putin: ‘If elected president, trust me, you are not going to be interfering in American elections.’

Revelations about the House briefing enraged Mr Trump, who complained that Democrats would use Moscow’s support for him against him, said people familiar with the matter.

Days later, he replaced the acting director of national intelligence, Mr Joseph Maguire, though administration officials have said it was not a direct result of the briefing.

The House briefing was supposed to be a repeat of an unremarkable classified session with the Senate Intelligence Committee last month and to inform lawmakers about a broad range of election threats, not just Russian interference. But lawmakers focused on the disclosures about Russia’s support for Mr Trump.

They have also argued that Mr Sanders’ gestures of peace towards the Soviet Union at the end of the Cold War might make him appealing to Mr Putin.

But some current and former officials expressed doubt that Russian officials think Mr Sanders has some hidden affinity with Moscow.

Instead, they said, a Russian campaign to support Mr Sanders may ultimately be aimed at aiding Mr Trump.

Moscow could potentially consider Mr Sanders a weaker general election opponent for Mr Trump than a more moderate Democratic nominee, according to two people familiar with the matter.

The Russian espionage claims and attacks from rivals were shrugged off by Sanders supporters as the Vermont Senator galvanised crowds for the latest Democratic presidential nomination vote.

“Bernie’s not gonna allow it,” said military veteran Brenda Bolton, 67, on Friday night at the Nevada nature centre where Mr Sanders hosted his final rally a day before the desert state’s caucuses began.

“He doesn’t want interference – Trump does, Trump welcomes it.”