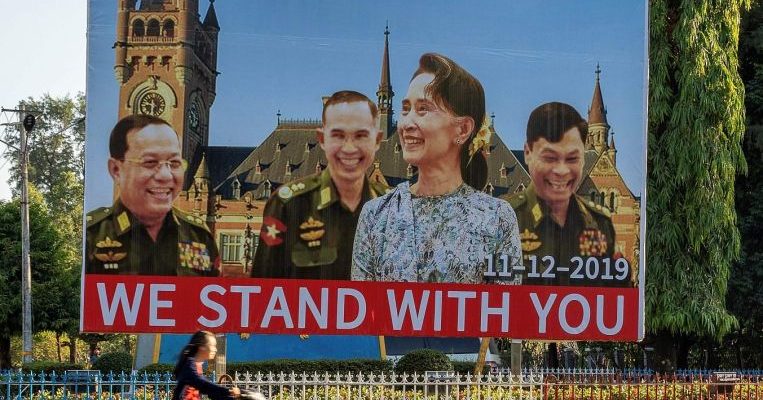 YANGON • Ardent fans of Ms Aung San Suu Kyi are snapping up spots on US$2,000 (S$2,700) tours to The Hague, in a display of moral support as Myanmar at the UN’s top court.

Supporter rallies, billboards and outpourings of praise online followed the shock announcement by the country’s civilian leader last week that she would represent Myanmar at the International Court of Justice (ICJ) this month.

The once-lauded democracy champion will be defending the 2017 military crackdown against the Rohingya minority.

One travel operator is organising a five-day tour to The Hague that includes visas and transportation as part of a US$2,150 package, said employee Ma July – a prohibitive rate for most in the developing nation.

Social influencer Pencilo and well-known TV presenter Mg Mg Aye are among the 20 or so people who have already signed up.

“I believe this is our duty as citizens,” Ms Pencilo, 29, said on Friday, urging any of her 1.1 million Facebook followers who have the means to do the same. “It’s important the world knows her compatriots are fully behind her.”

West African nation Gambia will open its case at the ICJ on Dec 10 on behalf of the 57 member states of the Organisation of Islamic Cooperation. The mainly Muslim country alleges Myanmar breached the United Nations’ Genocide Convention through bloody “clearance operations” against its Rohingya community two years ago.

Some 740,000 Rohingya fled to Bangladesh, bringing with them accounts of widespread murder, rape and arson – violence that UN investigators branded as genocide.

The crisis has left Nobel Peace laureate Suu Kyi’s reputation in the West in tatters – the UN team accused her of complicity – although allies China, India, Russia and Japan have been largely silent on the issue. But she remains highly revered in Myanmar where there is little sympathy for the Muslim minority, who are regarded as illegal immigrants from Bangladesh.

At this month’s hearings, the ICJ is expected to rule on interim steps to prevent further genocide and the destruction of any evidence.

Myanmar says the crackdown was justified to root out Rohingya militants and insists its own committees are investigating abuse allegations.