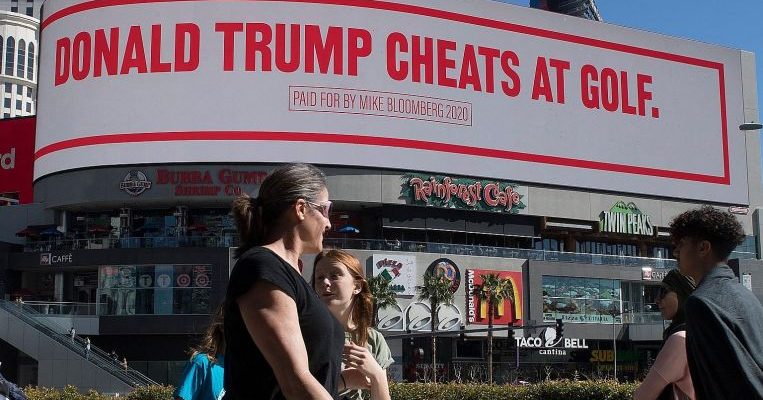 “Donald Trump lost the popular vote,” read one slogan on Friday on the world-famous street lined with casinos, while another read “Donald Trump’s wall fell over”.

The giant digital billboard is just 3km down the Strip from Mr Trump’s own hotel, where the President is staying while in Las Vegas.

Mr Bloomberg is vying for the Democratic nomination to take on Mr Trump at November’s election, and has focused his fire on the President rather than candidates from his own party.

Perhaps inevitably in a row between billionaires, golf was also a theme of the billboard messages, with a third sign reading “Donald Trump cheats at golf”.

“A lot of people cheat at golf, it’s probably true,” said Mr Gerry Frenze, a transport company owner from Delaware who was in town for a convention on Friday. “But I don’t like the idea (Mr Bloomberg) can buy his way into office.”

“Trump makes you want to attack him,” she said. “I don’t like (Mr Bloomberg) doing that. But Trump started it. The way he operates cheapens everyone.”