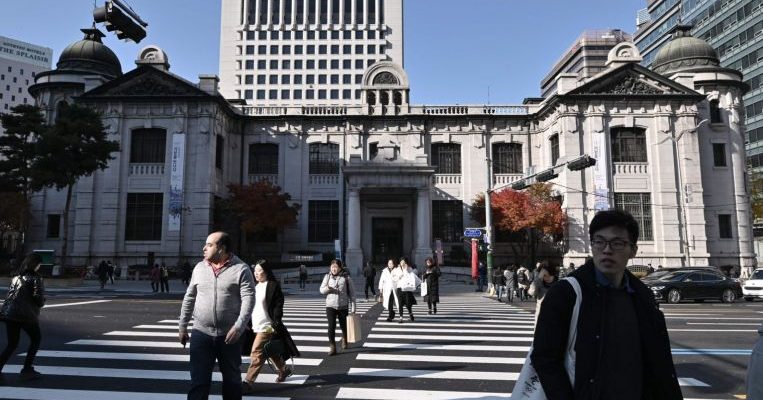 SEOUL (BLOOMBERG) – The Bank of Korea downgraded its growth forecast for the year on Thursday (Feb 27) amid mounting evidence of an economic hit from the , but left its key interest rate unchanged.

The decision to keep the seven-day repurchase rate at 1.25 per cent was forecast by 10 of 28 analysts surveyed by Bloomberg. The majority had projected a 25 basis point cut to a fresh record low. The bank now sees the economy growing 2.1 per cent this year, down from a 2.3 per cent projection in November, reflecting uncertainty over the impact of the Covid-19 outbreak.

South Korea’s won, one of the region’s weakest currencies this year, initially strengthened against the dollar after the surprise rate hold announcement, but has since retraced gains. The yield on 10-year government bonds also steadied after earlier rising.

The BOK’s decision to stand pat contrasts with the more aggressive response to the virus outbreak taken by Asian central banks from Indonesia to Thailand, and its own past rate cut following a virus outbreak in 2015. South Korea’s latest data shows the economy under pressure, as trade with China shrinks, sentiment plunges and the tourism industry reels. The government is working on an extra budget to beef up record spending plans for the year.

The BOK said in a post-decision statement that it will judge whether to adjust the degree of monetary policy accommodation, while “thoroughly assessing” the severity of the coronavirus outbreak and its impact on the domestic economy. The bank also said it would raise the cap for cheap loans available to companies affected.

“The BOK may cut rates after the government rolls out an extra budget in March, creating the impression that the two are working closely,” Meritz Securities Co. economist Stephen Lee said. “For now, providing support for small businesses while keeping the rate on hold is the optimal choice for the BOK.”

The decision shows Governor Lee is more worried about the financial risks of low rates at the moment, and is waiting for clarity on data and the extent of fiscal stimulus before acting. Economists who projected a rate hold pointed to concerns about an overheated property market and high household debt, alongside a weakening currency. The BOK may have also wanted to preserve its limited policy room, having cut rates twice in 2019.

Governor Lee’s assessment of the epidemic’s impact at a post-decision press conference will offer clues about whether the BOK is likely to cut at its next meeting in April.

“The BOK just can’t decide yet whether the virus has changed Korea’s economic trajectory,” said Park Hee-chan, an economist at Mirae Asset Daewoo. “There’s little doubt first-quarter growth will suffer, but it will take some longer-term assessment of the economy before the BOK returns to an easing mode.”

The number of South Korea’s infections has spiked from just dozens to over 1,500 in the past week. Both exports and imports to China fell in the first 20 days of February despite the benefit of more work days, signaling that the virus is disrupting supply chains between South Korea and its biggest trading partner.

BOK watchers will also watch Lee’s comments to see if he has other measures up his sleeve. In October, he said the bank was studying unconventional policy tools, but offered no details. Instead of addressing the media live, Lee will speak over YouTube to minimize the risk of contagion.