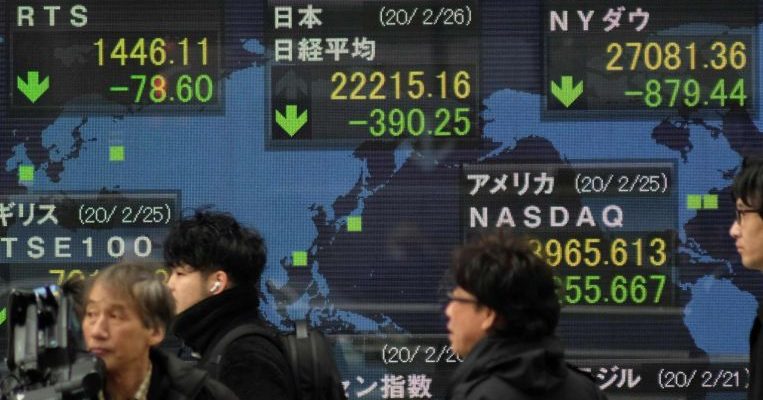 TAIPEI (BLOOMBERG) – Foreign investors are cutting their exposure to Asian markets at the fastest rate in years, as continues to spread globally.

They sold an average 6.8 billion yuan (S$1.35 billion) more of Chinese shares from Monday through Wednesday (Feb 26) than they bought, set for a record over a whole week. Foreigners unloaded a net US$1.1 billion of Taiwan stocks on Wednesday, the most in six years, while the total hit the highest in South Korea since June 2013 at US$868 million. As investors continue to exit the Philippines, that market on Wednesday had its worst day in four years.

Global equities have skidded this week with the number of confirmed cases surging in countries from South Korea to Italy. The MSCI Asia Pacific Index had dropped more than 8 per cent since its January high to below its 200-day moving average for the first time since October. It lost more than 4 per cent this week alone, heading toward its worst showing since October 2018.

“Foreign investors are pulling out of emerging markets as they are worried about supply-chain disruptions and resumption of work due to the coronavirus,” said Harris Liao, chief investment officer at Concord Securities. Earnings and economic-growth forecasts have been cut around the world in response.

To be sure, this month’s sell-off in emerging-market stocks has created an attractive entry point, according to Goldman Sachs Group. UBS Global Wealth Management echoed its view, advising its high net-worth clients to load up on Chinese shares.