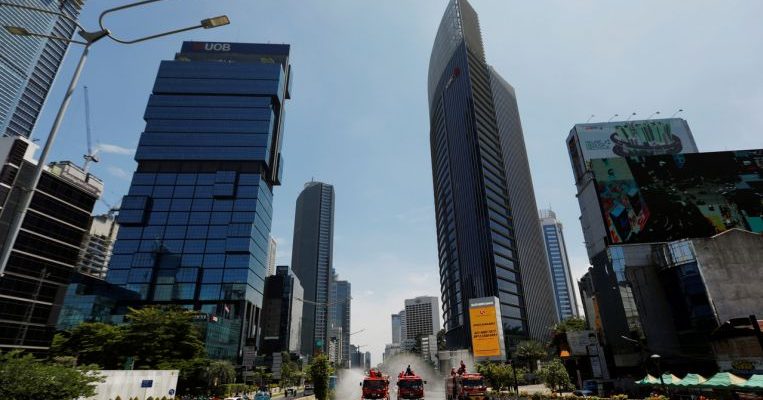 JAKARTA (BLOOMBERG) – Indonesia slashed its growth forecast by more than half as takes a toll on South-east Asia’s biggest economy, prompting the government to adopt a series of emergency measures.

The economy is now projected to grow 2.3 per cent this year, compared to an initial estimate of 5.3 per cent, Finance Minister Sri Mulyani Indrawati said on Wednesday (April 1). Under a worst-case scenario, the economy could contract 0.4 per cent, she said.

Indonesia is scrapping fiscal limits as it ramps up its response to the virus outbreak. President Joko Widodo on Tuesday took a number of emergency measures, including cutting corporate taxes, temporarily removing the budget-deficit cap and allocating 405 trillion rupiah (S$34.8 billion) to fight the pandemic.

The new growth forecast is part of sweeping revisions to previous budget estimates announced by the finance minister Wednesday:

– Debt-to-GDP ratio to remain at about 60 per cent

– Revenue to declilne by 10 per cent

– Annual inflation projected in range of 3.9 per cent-5.1 per cent compared to a previous estimate of 3.1 per cent

The rupiah, already down almost 13 per cent in the past month, may tumble to as low as 17,500 per US dollar. Under the worst-case scenario, the currency may plunge to 20,000

Indrawati said the spread of the novel coronavirus had created a humantiarian and financial crisis that has lead to high volatility and global panic. “We must improve our response,” she said, adding that authorities think the outbreak in Indonesia may peak as early as this month.

Like many other countries, Indonesia is confronting a crisis on two fronts, with a spike in Covid-19 virus cases stretching the health system to near-breaking point and the economy rapidly deteriorating.

The budget deficit cap of 3 per cent of GDP, introduced in 2003 in the wake of the Asian financial crisis, will be removed immediately, allowing the government to significantly ramp up its stimulus. The government will revert to the 3 per cent cap in 2023.

There are worries of widespread job losses in a nation where about 70 million of its 270 million population work in informal employment. Tuesday’s steps follow two previous stimulus packages announced since late February.