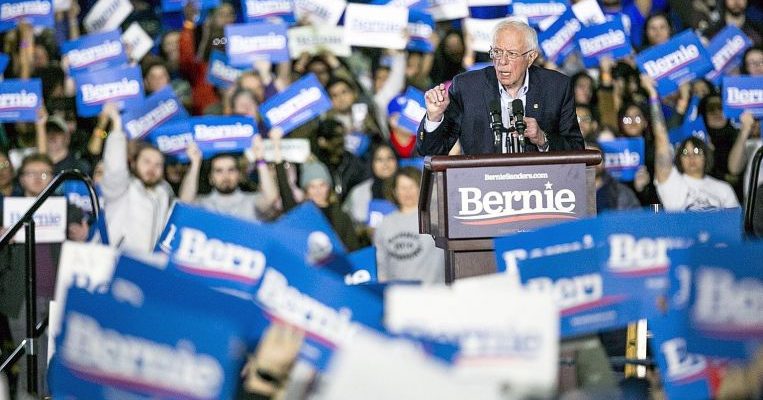 DETROIT • Calibrating his approach for a tough head-to-head primary match-up in a year when many Democratic voters want to put up a united front, Senator Bernie Sanders on Friday renewed his attacks on Mr Joe Biden’s record on trade while also conceding that the former vice-president could defeat President Donald Trump.

In Michigan, where the Sanders campaign is running a TV advertisement featuring an autoworker who says his community has been “decimated” by free trade deals, Mr Sanders attacked Mr Biden for his support of the North American Free Trade Agreement (Nafta) in the 1990s.

“Joe Biden and I have a very serious disagreement with regard to Nafta,” he said at a round table he convened involving workers, union leaders and economists in Detroit before a rally attended by thousands.

“Just last year – I’m not talking about 20 years ago – Joe said that voting for Nafta, quote, was not a mistake, end of quote, and a few years before that he called Nafta a success,” Mr Sanders said.

“Joe, you’re wrong. Nafta was not a success. Voting for it was a big, big mistake.”

After major disappointments on Super Tuesday, Mr Sanders is hoping for a comeback on Tuesday as six states go to the polls, none more crucial for him than Michigan, the first of several Midwestern industrial states to vote in the next two weeks. Four years ago, he pulled off one of the biggest surprises of his first presidential campaign when he upset rival Hillary Clinton in Michigan.

“We are in the midst of a very, very difficult primary process,” Mr Sanders told reporters before taking the stage at his rally. “Come Tuesday, maybe Michigan is the most important state.”

But in a sign of the careful approach both candidates are taking while seeking to draw distinctions between their campaigns, Mr Sanders reiterated multiple times that he would support Mr Biden if he eventually won the presidential nomination, and, pressed by a reporter, said he believed Mr Biden could beat Mr Trump in November.

“I think we are the stronger campaign to defeat Donald Trump, but you have not heard me say that I think that Biden cannot defeat Trump,” Mr Sanders said.

I think we are the stronger campaign to defeat Donald Trump, but you have not heard me say that I think that Biden cannot defeat Trump. I will certainly do everything I can if he is the nominee.

MR BERNIE SANDERS, on the prospects of defeating President Donald Trump if he or his rival Joe Biden wins the nomination.

“I will certainly do everything I can if he is the nominee.”

On Friday night, Mr Biden said: “What we can’t let happen is let this primary become a negative bloodbath. I know I’m going to get a lot of suggestions on how to respond to what I suspect will be an increasingly negative campaign that the Bernie Brothers will run. But we can’t tear this party apart and reelect Trump.”